From theory to leading technology for 5G

The “Massive MIMO” communication technology has become a cornerstone in the construction of the 5G network. Research within ELLIIT has been closely involved along the complete journey – from a new and interesting theoretical concept, through demonstrations that it works in practice, to industrialisation and construction.

The ideas behind this communication technology origi-nated with Tom Marzetta at Bell Labs, working at New Jersey in the US, in 2009. ELLIIT researchers were early to recognise its potential, and started the first projects as early as 2010, without at that time realising that the technology would form the foundation of the fifth gene-ration of wireless network ten years in the future. Scientists at Linköping University, under the leadership Professor Erik G Larsson in the Department of Electrical Engineering, developed the theoretical basis, while scientists at Lund University, under the leadership of Professors Fredrik Tufvesson and Ove Edfors in the Department of Electrical and Information Technology, started to study how the technology could be converted to reality.

“MIMO” is an acronym for “Multiple-Input Multiple-Output”. Hundreds of small antennas, each of which may have a power of 10 mW, are connected. All the antennas send signals with carefully determined delays. The delays are chosen so that the copies of a signal arrive at the intended receivers at exactly the same instant, but at slightly different times at all other receivers. This gives a strong signal at the intended receiver and only a slight disturbance at all the others.One hund–red antennas each of 10 mW gives a power of 1 W, which is distributed among the users. This is conside–rably less than the power used by antennas in the 4G network. The low power is enough, since each signal is given in a specified direction. Massive MIMO thus provides a combination of low output power, high energy efficiency and superior capacity, since many receivers can receive signals at the same time.

“This is a field within ELLIIT that has seen long and close collaboration between researchers in Linköping and Lund. Several joint projects have been financed by the Swedish Research Council and the Swedish Foundation for Strategic Research, and most recently also by the Mammoet EU programme”, says Fredrik Tufvesson.

The original theories from Tom Marzetta used an infinite number of antennas. This means that the first project for the researchers in Lund was to find out how many anten-nas would be involved in practice. “It turned out that in this case an infinite number was 128. We used recorded channel data to verify the theoretical algorithms, and we were the first in the world to demonstrate that it worked in practice and in real time”, says Fredrik Tufvesson.

The researchers could also demonstrate how the hard-ware functioned, and confirm that it functioned even in noisy city traffic.Within the framework of ELLIIT, the researchers in Lund have also developed a high-performance chip.“What’s interesting and unique here is that ELLIIT has been involved along the complete journey, from a visio-nary communication theory to working antennas and a technology that constitutes the foundation of today’s 5G network”, says Fredrik Tufvesson.However, the work has involved other researchers than just those in Lund and Linköping. Scientists have colla-borated with both academic and industrial partners, in Sweden and abroad.“We contacted the inventor at an early stage so that we could understand the potential in depth. In 2009, the theory was considered to be far too complicated to ever work in practice”, he says. 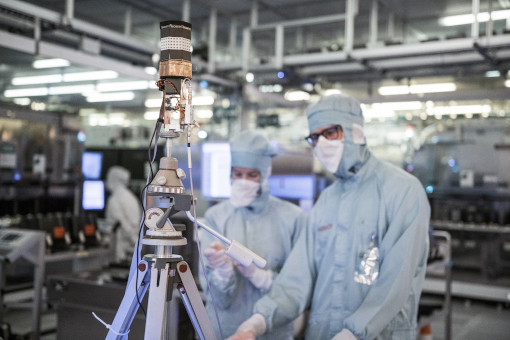 “The EU project Mammoet was also key to bringing our research closer to industrial application. The close collaboration with Ericsson and Sony meant not only that Sweden achieved a leading position in the field, but also that the Massive MIMO technology became a fundamental pillar of the 5G standard. And this the case not only in Europe but also other parts of the world”, says Fredrik Tufvesson. The next phase is to for the researchers in Lund and Linköping to develop the technology towards 5G+ and 6G. The joint EU project Reindeer was recently started to take the technology to the next level.

Many scientists have been involved in the development during the past ten years, of which the core has been: Fredrik Tufvesson, professor of radio systems Ove Edfors, professor of radio systems. Liang Liu, senior lecturer in digital electronic design, all of whom work at the Department of Electrical and Information Technology, Lund University. Erik G Larsson, professor in communication systems. Emil Björnson, associate professor in communication systems both working in the Department of Electrical Engineering, Linköping University.