Children with autism can improve their social skills with a cute and friendly robot, and older people with dementia feel calmer and more at peace with a robot cat purring on their lap. This has been shown by recent cognitive systems research, but the question remains: how do we interact with robots when social signals such as eye contact are not available?

Robots are slowly but surely becoming part of everyday life. So far, they carry out such simple tasks as vacuuming the house or mowing the lawn, but this is just the first step. It has become clear that social robots with human- or animal-like appearance can increase people’s well-being. 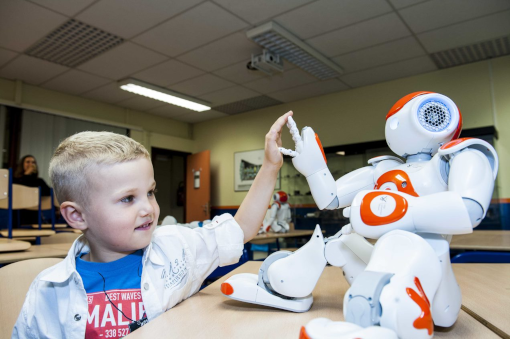 During the EU research project DREAM, a collaboration between six European universities that ended in 2019, Professor Tom Ziemke and his colleagues showed that social robots can be useful in therapy for children with autism. SoftBank Robotics, a company that participated in the project, is continuing to develop solutions that facilitate learning and increase the ability of children with autism to communicate with the people around them.

Tom Ziemke is professor in the Division of Human-Centred Systems, Department of Computer and Information Science, at Linköping University, where his professorship is partly financed by ELLIIT. He is now continuing the work of the DREAM project in collaboration with several homes for the elderly in Östergötland. A robot dog and a robot cat have visited care homes for older adults with dementia.

“We focussed on robot cats, but some of the elderly didn’t like cats, so we had to take a dog along as well”, he says.

A nine-month study was carried out before and during the corona pandemic, with positive results. Sofia Thunberg, a doctoral student supervised by Tom Ziemke, studied how older adults interacted with the robot cat: how they talked to and about the cat – or dog. She also interviewed personnel at the centre. In the next step, she will take a user-centred perspective to investigate how robots can be introduced, used and evaluated, giving an increased quality of life for older adults and people with dementia.

During the autumn of 2018, Sofia Thunberg studied in collaboration with the Swedish national train operator SJ ethnographical aspects of how passengers interacted with a humanoid robot at Stockholm Central Station. The robot, Pepper, answered questions and helped passengers.

Other examples could be given, and some of the research deals with how we can interact with robots that do not resemble people or animals. The research group collaborates, for example, with both RISE SICS and Saab in several projects that study how people interact with swarms of drones and unmanned vessels. A planned collaboration with Toyota Material Handling addressed how warehouse personnel interact with autonomous trucks that buzz around carrying goods.

In 2021 and 2022, a postdoc financed by ELLIIT will study how people interact with the autonomous buses that traffic Campus Valla at Linköping University. The bus, known as ELIN, currently moves at walking pace around the campus and everyone who studies or works there sees it every day. The project, which is a collaboration with the Swedish National Road and Transport Research Institute, will allow the bus to service more distant off-campus areas and, eventually, drive at higher speeds.

“Robots used in public environments must be 100% safe, in all situations. We need to investigate how autonomous vehicles can function in everyday life. How does a cyclist, a child or an older person perceive a robot bus as it approaches them? Do they expect the bus to see them and stop, even if it is not possible to establish eye contact with a driver?” Tom Ziemke asks.

The vision for autonomous and small electrically powered buses is that they should function as resource-efficient transport for commuters. In this case, they would travel at significantly higher speeds and would thus require longer braking distances. And maybe in the future they would have a robot dog onboard to help their owner get home safely.