If you wander off the lane or touch the lane marking, your car tells you about it, and the most recent models can even gently take you back to the middle of the lane. Research in ELLIIT has shown that if the car also provides help during swift avoidance manoeuvres, the number of accidents could be reduced by around 80%.

“Completely autonomous and driverless traffic on conventional roads and under all possible weather conditions is probably not going to be possible for a fairly long time. In particular, we must solve the problems associated with mixing autonomous and human-driver traffic during a transition period”, says Anders Robertsson, professor at the Department of Automatic Control, Lund University.

The development of autonomous aids for the driver has, however, progressed rapidly in recent years, and a technique known as “lane departure warning”, or LDW, is installed on most modern cars. The driver receives help in keeping the car in the desired lane with the aid of radar, cameras and computer power. The next step will be to aid the driver during sudden avoidance manoeuvres such as may be needed if a moose, deer or wild boar suddenly runs out into the road. The car keeps tracks of the edges of the road and can use a situation-awareness system, including visual and infrared cameras, to detect an animal on the road.

“The car also receives an indication of where the animal is relative to the car, or the direction it’s running in, and can steer such that it misses the animal, if possible”, says Lars Nielsen, professor of Vehicular Systems at the Department of Electrical Engineering, Linköping University.

The time taken to optimise a manoeuvre to avoid a sudden moose or to take a hairpin turn in the Alps has been reduced from hours to minutes, and even to seconds, using results from the most recent ELLIIT research. Since 2010, new tools and methods for dynamic optimisation of vehicle manoeuvres have been developed in several doctoral student projects, in collaboration between Lund University and Linköping University.

“We can numerically determine which the optimal manoeuvre is and then decide which control principle is the best”, says Lars Nielsen. 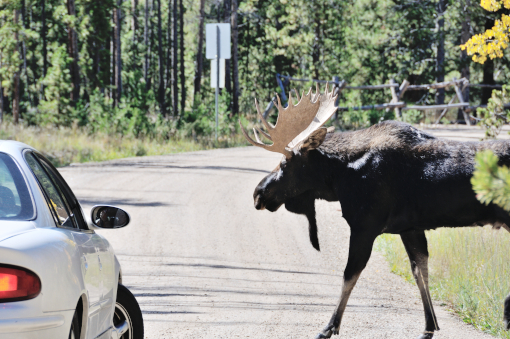 One example of a control principle is to study the force vectors on the car, from tyre friction, brakes and steering. One of the results that Victor Fors presented in his thesis at Linköping University is that the safest manoeuvre is one in which the resultant force is maximised in one direction, obliquely backwards. In this case, the force from each tyre is used and collaborates to give maximal force in the avoidance manoeuvre.

“Our simulations with this method show that we get very close to the optimal avoidance manoeuvre”, says Lars Nielsen.

Together with Björn Olofsson from the Department for Automatic Control at Lund University, Lars Nielsen has examined 233 run-off lane accidents recorded in a German accident database. All accidents ended in fatalities or very serious injury. The researchers examined entry speed, radius of curvature, etc., in order to determine how many accidents could have been avoided with an autonomous system. They concluded that around 80% of the accidents were avoidable.

“It’s not always possible to avoid a collision, but since the car is braking as hard as possible, we can conclude that the speed is reduced also in the other cases to such an extent that the injury degree is less”, says Lars Nielsen.

Humans can react rather too slowly, or maybe we panic and turn the steering wheel too much. It’s also possible that a driver falls asleep in some cases and the car leaves the carriageway.

Expertise within this field of research has been disseminated to the automotive industry when doctoral students who have worked within ELLIIT projects since 2010 have graduated and continued to key positions at companies such as Scania, Volvo Trucks, Volvo Cars and Mitsubishi Electric.

The most recent results have also been spread through the courses, both at undergraduate level and for doctoral students, held at Lund University and Linköping University. Examples include the doctoral course “Motion Planning and Control” and the master’s course “Autonomous Vehicles – Planning, Control and Learning Systems”, which have become increasingly popular among students in both Lund and Linköping.

“Interest is growing. Autonomous vehicles are already being used in mines and enclosed environments such as harbours. We are, however, also looking at the forces in robot arms applicable for harvesting in forestry and in many other contexts within robotics”, says Anders Robertsson.